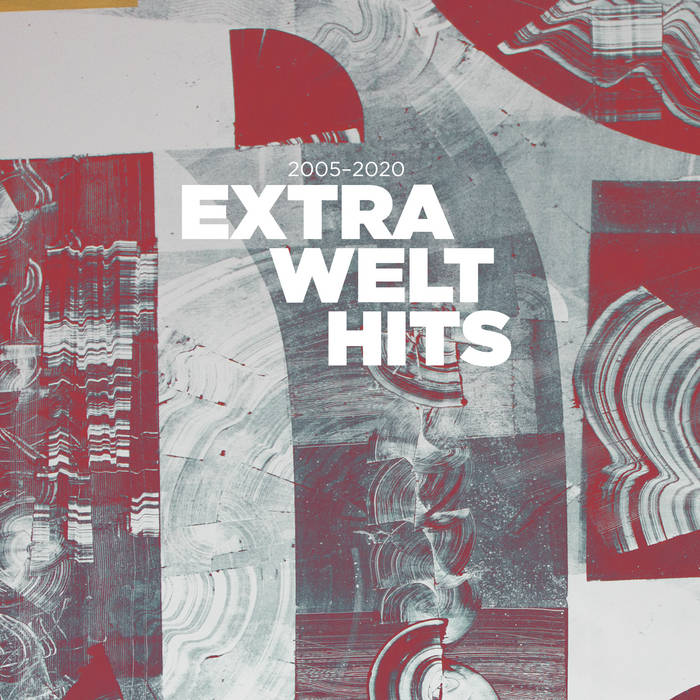 To coincide with their 15-year anniversary, Extrawelt are quietly proud to release Extra Welt Hits. A best-of collectors box-set, it covers every album and period from their dominant yet enigmatic history as one of Germany’s most highly regarded electronic acts. Etched into the 4-piece vinyl box-set is a 15-track playlist which takes us back to the dawn of their beautiful “Extra World”.

Extra Welt Hits is a time capsule drenched in the essence of the act’s DNA. Accentuated by newly-remastered tracks that serve their ever-evolving, clever and out-of-the-box sound, each recording spills into the next with sonic precision. From the monumental masterpiece of the album’s opening track ‘Ferneh’, through to the “One- way ticket to oblivion, please” hits of ‘Soopertrack’ and ‘Titelheld’, the listener is left captivated. And, because it’s what they do best, the destruction and artful reconstruction echoed through their shows are also present. These are beamed out in the exclusive live versions of ‘Zu Fuss’, ‘Dark Side Of My Room’ and ‘Herzstück’. Recorded in Tokyo, Paris and at the Fusion Festival, these bent, broken and rebuilt icons prove once again why they are one of the most influential live-acts of the semi- underground. That live-act—a futuristic symphony of dance music—is both undefinable and strays well past the norm. Their chance to manipulate their creations in a flow of measured spontaneity, it continues to leave permanent impressions on audiences everywhere. The result is an experience focussed on purism with great care in presenting the deepest core of their craft, in essence; exactly what sums up their musical galaxy.

It was never the acts plan to release a best-of album, especially at the unusual 15- year mark, rather, it rolled into motion naturally as a way to immortalise the victory of being around so long (in a scene where the shelf life for most artists doesn't last much longer than an album or two, fifteen years is something of a triumph). With that, Extrawelt invite those that were there from the start to join them in getting a kick out of being “officially mature”. And for those that were not, to have the chance to hear their story up until now, like it’s never been told before. And yes, while the listener may have outlived many of the clubs which first introduced them, it is unlikely that anyone has outgrown this brave, intangible and absorbing music—one that is all theirs, but all ours, too. A sound which is still as relevant today as ever it was; feeding the older generation’s electronic-itch while also enabling the new ones to go totally nuts.