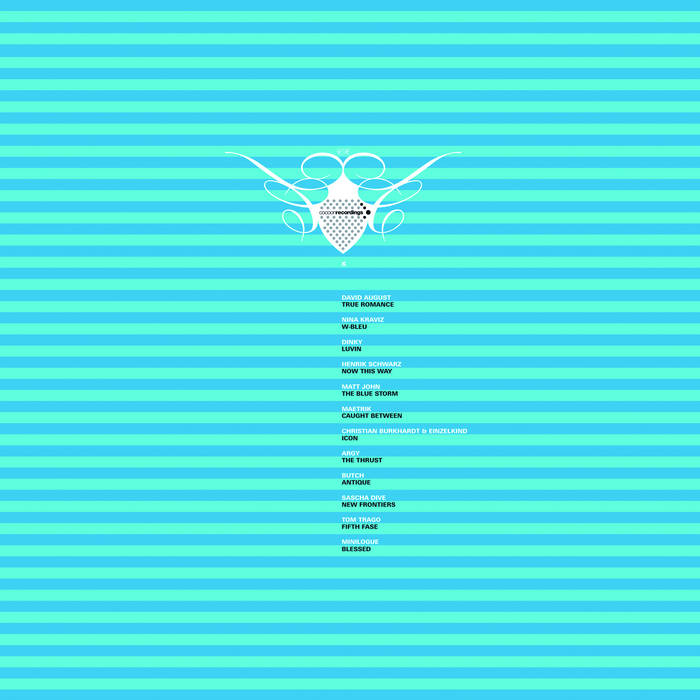 The Cocoon Compilation K, being the longplay flagship in the Cocoon catalogue, adequately starts the second decade of the label with a musical imperative. But don't worry: even if the letter K has sometimes been misused as an indicator for the degree of hardness of some sonic noise in the past of the Tech-House scene, "K" is definitely the deepest survey of contemporary electronic dance music that has ever seen the light of day on Cocoon Recordings. The beginning is performed by the 20-year-old Berliner David August, who was able to establish himself as one of the most promising talents in the capital's scene with releases on Diynamic and Stil Vor Talent. With its sensual and melancholic SloMo-Disco and a short Acid insert, "True Romance" sets a first massive musical exclamation mark. After this, it gets profoundly hypnotic, thanks to the Siberian singer and DJ/producer Nina Kraviz, who already caused a stir with her releases on Radioslave's Rekids label and with being the host of Moscow's Propaganda Club. Her dreamy vocals and the streamlined Deep House of "W-Bleu" are for sure something that Baby Ford would have been proud of, too. Following these two Compilation newcomers is Alejandra Iglesias aka Dinky, who was already able to give her career a big kick start with the unforgettable "Acid in my fridge" seven years ago. "Luvin" indulges the senses with a darkly shimmering Disco-House-Pop draft and some subtle Goldfrapp reminiscenses, and has thus what it takes to become one of THE summer tracks 2011. The Berliner-by-choice Henrik Schwarz from the Inner Visions circle is then uncompromisingly setting the course more to the dancefloor with his mythic-percussive Dub-House runner "Now This Way", while the Far-Eastern-like, hypnotic reduction of the "Blue Storm" by Matt John – one of the most important artists on the Berlin in-label Bar 25 – irresistibly takes our collective consciousness to Floor #7 after that. And so, literally each track of this standard-setting acoustic treasure chest deserves a detailed appreciation. The meeting of the two House modernists Christian Burkhardt & Einzelkind ("Icon") as well as Sascha Dive's Minimal-Ska-influenced "New Frontiers" show that the Rhein Main area is still good for some damn innovative tracks. Maetrik shines again with his dirty Soul-Tech ("Caught Between), and with the mean high-frequency Wild Pitch "The Thrust", the Greek-born Argy delivers the inofficial successor of his "Unreliable Virgin". Besides that, the Dutch Rush Hour shooting star Tom Trago continues the long-lasting history of Detroit-sounding relations with our neighbour country in a congenial way, using a quite percussive organ motif ("Fifth Fase"). The Mainz-resident Butch doesn't need an introduction anyway, at least since "No Worries" came out – with his siren-like Deephouse jewel "Antique", he could hardly be ignored this summer. The compilation is completed by our two favourite Swedes Sebastian Mullaert and Marcus Henriksson aka Minilogue from Malmø. Three years after the phenomenal "Animals", their 16-minutes-track "Blessed" is without doubt the most sensual and melancholic title that the two have ever produced together, and this track is a more than dignified finale for an edition of the Cocoon Compilation that is hardly to be exceeded when it comes to acoustic perfection and artistic richness. You can't get any closer to the pulse of modern electronic music culture, in a little more than 100 minutes.