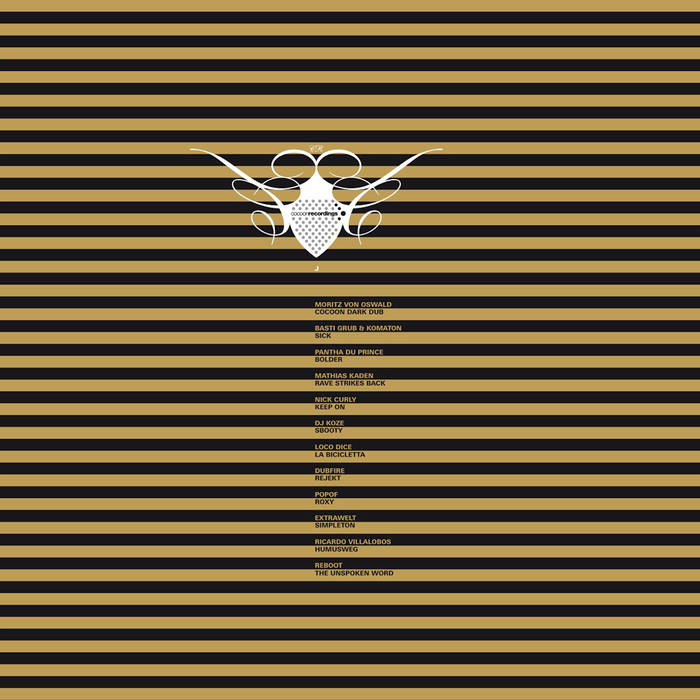 When the then still young Frankfurt label Cocoon Recordings discovered the long-playing format with its Compilation A in Summer 2000, probably nobody could have, even approximately, foreseen the success story of this series. For ten years now, the cocoon-style declination of the alphabet is a guarantor for high-class and exclusively produced floor burners by the international Techno and House elite, and, beyond that, a reliable indicator for the stylistic bandwidth of contemporary electronic dance music. And even with the previous editions A to I having set the bar damn' high, the J edition starts with a true musical sensation, as the opener "Cocoon Dark Dub" comes from nobody less than Moritz von Oswald. "Those who – even just rudimentary – have followed the evolution of electronic music over the last twenty years, know about the outstanding importance of von Oswald's timeless classics like "Domina", "M-4" or the whole Basic Channel series. Insofar, "Cocoon Dark Dub" is maybe the nicest birthday present at all, and an absolute honour for our label." (Sven Väth) So, initially, it's the heartbeat of Dub Techno that pulsates through a lonely piano and noise fractals, and club world keeps its breath for a good eight minutes. However, the Compilation J literally puts out all the stops over the following 110 minutes playtime and shows what modern electronic dance music has to offer in these times. Mathias Kaden's intuition for the crowd and location is legendary, his music is both distinctly ambitious and refreshing, and so is his contribution "Rave Strikes Back". The Dial impresario Pantha Du Prince from Hamburg is celebrating crystalline ice dance ("Bolder"), while Cécille label head Nick Curly, with his sensual Tribal House, is feasting the most compact form of Disco Boogie that one can imagine ("Keep On"). With "SBooty", the Kompakt ambassador DJ Koze, also from Hamburg, is flabbergasting the audience by combining virtually incompatible elements. Improvised horn licks are whirring through a flickering resonating body while the bass kick is filling up the tropic ambient air. However, the invariably Cocoon policy to always support interesting newcomers becomes visible in the contribution of Basti Grub from the Rhine Neckar area, whose label Höhenregler is well-known for several musical insider tips in the past. "Sick" is ascending into your brain immediately with its melodic high-frequency hook line and mysterious vocals, matching perfectly to the melancholic playfulness of the tracks by Guy Gerber. Deep Dish member Ali Shirazinia aka Dubfire and the Parisian Popof are the ones to prove impressively that you virtually can't go wrong with stringent Hypno Techno and a diaphragm-shaking bass drum. Besides the above-mentioned, the J compilation holds such well-known producers like Loco Dice, Extrawelt, Reboot and last not least long-time Cocoon companion Ricardo Villalobos, whose 12-minutes-long dance on the echo-filled "Humusweg" once again draws the bow to the Basic Channel sound from another side, and leaves much room for own visions in between the pulsing metronome of the bass line. In any case, the history of electronic dance music has not been outtold so far.