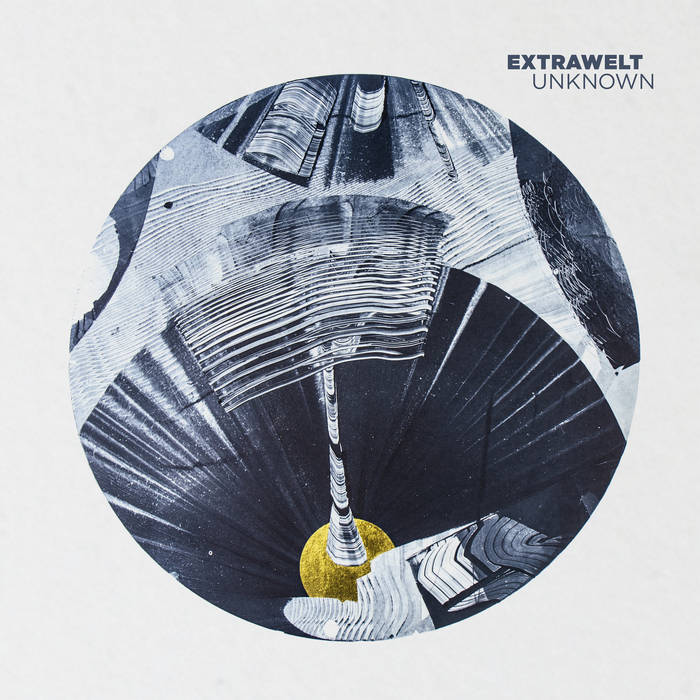 Wandowaiato I‘m an aural astronaut and this is the soundtrack of a gorgeous galaxy, also known as the XTRWLT. As always, Arne and Wayan are bending the space-time continuum. Spiralkinder of the world, unite and take over!!

AugustusGoop Been waiting for this gem to be released for years! Bravo chaps! Favorite track: Auslöser.

tiefenschoen "Why do you love this album?"
Cause its EXTRAWELT.
Nothing more to say.
Their music must be from another planet!

Extrawelt are Arne Schaffhausen and Wayan Raabe. Both have been around for about 40 years, and making music together for half that time. They enjoy normal things and are ashamed of their carbon footprints due to the large number of flights they take to bring them to their gigs. Unknown, is the tenth studio album from the producer team, and the fourth under the name Extrawelt. Its largely devoted to another side of their creations.

Something’s different. Well, Extrawelt releases always have been somehow different yet, despite becoming instantly absorbed into the familiar Extrawelt atmosphere when listening, I can’t help but notice again: something’s very different. Feet are bouncing, mind is traveling and my fingers speed across the keyboard like they’re on fire. I’m trying to imagine what it would be like to listen to Unknown with closed eyes in the midst of a throbbing concert instead of through laptop speakers. Listening to Extrawelt on crappy speakers is anyway never a good idea, as it really deserves the backing of the loudest and best possible sound system.

With this, I leave the audio confines of my low-fi laptop world and get in the car. Cranking up the stereo, I cruise around aimlessly — lost in appreciation of the music from within the bubble of my metal highway-pod on wheels. I’ve got the urge to speed up — which is surprising considering I’m a usually a very sensible driver. The bass and the beats blow up in my face. Something uncluttered. Something broken. Something grimy. Something sideways. Something undeniably Extrawelt, yet inherently different to what we’ve come to expect from the Hamburg pair. I don’t plan on getting all emotional, but something about this twelve track journey fits together so superbly it’s hard not to be overcome with at least a few shivers up the spine. With profound bass lines and cutting drums, I keep coming back to these sounds. Again and again these sounds. On one hand you feel that you know them, on the other hand you don't know them at all. Is that a synthesiser or a voice? Is it rotating or just linear reinvented? Whatever the answer, my mind goes astray. Whether this is exotic or native doesn't matter: all I know is that it’s great. Meanwhile I’ve reached track seven and now I realise what’s been different all along — it isn’t techno! Somehow, they’ve accomplished staying true to themselves despite deploying not even one four-to-the floor-bass drum. Admittedly, you can find a couple of similar tracks on a few of their previous releases, but here you’ve got a whole album full of it. I gotta listen to track seven again. As a music writer I’m asking myself: what genre of music is this actually? Neo-Electro? Alternative Electronica? Emo-EDM?? Ah, whatever — these guys don’t like to be put into boxes anyway. It’s simply Extrawelt.

As I talk to Arne and Wayan later on, I discover that the tracks on Unknown began simmering more than ten years ago without any goal or idea regarding if they’d end up releasing them. Come 2018 though, the time felt right to dedicate an entire album to this side of their musical spectrum. This also explains how Unknownappeared so quickly after their most recent LP ‘Fear Of An Extra Planet’. As the guys mention “We just felt these tracks a lot when we made them, and never cared really if anyone would be interested in it”.