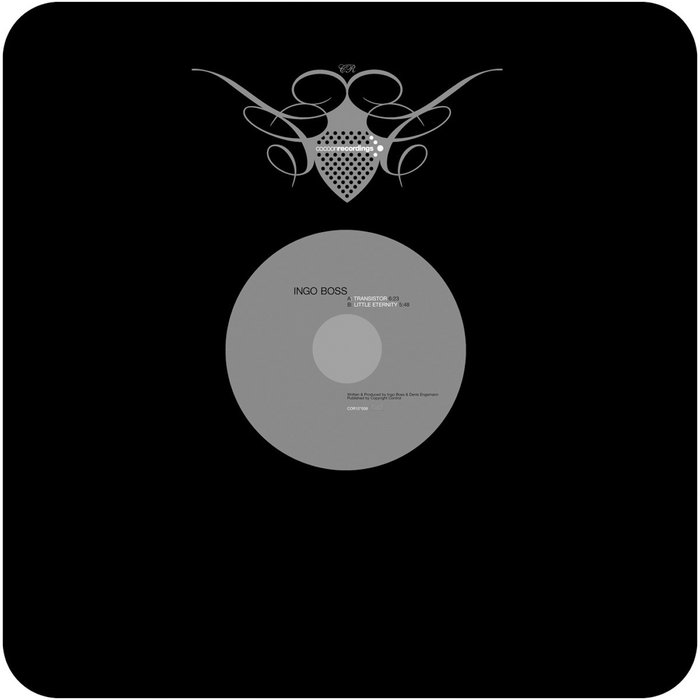 A: Transistor
B: Little Eternity

Being 24 years old, Ingo Boss is already one of Frankfurt's most innovative DJs and Producers. He first made contact with Techno in 1990, and by 1998, he had played several smaller parties. The same year, he started working in Delirium Record Store in Frankfurt and continued to play in clubs. His sets reflect the hard sound, which he was introduced to at the Omen in Frankfurt. Ingo mixes this sound with Minimal Techno, Elektro, Dub and Ambient.

Soon, the first releases together with studio partner Denis Engemann – who also co-produced Transistor – followed: "modes" on PV-Recordings (#027) in April 2000; two more in cooperation with Delirium Mainbrain W. Jörg Henze on Delirium Red (#044 and Reverse 1.12). His mixing skills can be heard on two label compilations, the Red-Compilation and the PV.LAB.COM.2 Besides that, Ingo remixed "ritmo total" from Toni Rios' album Danza Electronica.

In 2001, Ingo was part of the PV Label Tour and the Delirium Anniversary Tour all over Germany and played in several important german clubs, such as Palazzo (Bingen) or Club Achter Mai (Chemnitz). He was resident at the Spectrum in Offenbach and covers the U-Bar at the U60311 (Frankfurt) two times per month with Ambient Sounds, the big club sees his performances four times a year. Soon, Ingo played his first gig abroad with Pascal F.E.O.S. in Belgrade (Jugoslavia) in 2001.

Transistor is industrial sounding sawtooth Techno with a shrill lead sequence and a varied arrangement; the built-in Short Breaks are speeding up the track with a wavering bass line. Little Eternity on the other hand is fluffy electronic Techno. With its straight bass drum, a melodic bass and a playful bell-like piano part, the harmonic track with nice hooks and epic sounds is moving towards Electro; the message of the track becomes audible within its short vocal part: "After you showed me the light, I began to feel my heart inside, you showed me the way to my reality, there, I want to stay for eternity."

Ingo Boss "Transistor" is released in June 2003 and is distributed exclusively by Intergroove Germany.